Scour of rock by hydraulically induced plucking of rock blocks from the stream bed is an important geomorphic process in rock channel evolution and, on a practical level, this process is a critical issue facing many of the world’s dams at which excessive scour of the dam foundation or spillway can compromise their performance. Numerical modeling of rock scour is a challenging and interesting problem that combines rock mechanics and hydraulics of turbulent flow. Our approach has been to directly model the solid and fluid phase by representing the individual polyhedral blocks using the Discrete Element Method (DEM) and using the lattice Boltzmann method (LBM) to represent water. The multiscale nature of rock-fluid interaction requires adaptive meshing in a parallel computing environment so that fluid flow both through joints and fractures, and over the rock surface are captured. Currently, we are working on applying the coupled DEM-LBM approach on a High Performance Computing platform such the the numerical model is able to capture the multiscale nature of the fluid-solid interaction with sufficient fidelity to understand mechanistically what governs plucking.

Future potential applications include direct evaluation of the effect of water pressure inside the fractured rock mass, along potential sliding planes, and can be extended also to rock falls and slides into standing bodies of water, such as lakes and reservoirs.

Flooding annually causes thousands of fatalities and billions of dollars in damage globally and, due to climate change, frequency and magnitude of extreme flooding events is expected to increase. High-water marks represent key information to be collected post flooding for advancing the understanding of flood impacts and the development of mitigation strategies. However, high- water marks often become increasingly difficult to detect with time passing after a flood event due to drying. In addition, access into flooded areas can be complicated by destroyed infrastructure, leading to significant loss of data or risk to personnel entering these recently flooded areas. We are exploring the application of multispectral imagery in rapidly collecting and mapping high-water marks post flooding in order better quantify spatially varying flood-related hazard. 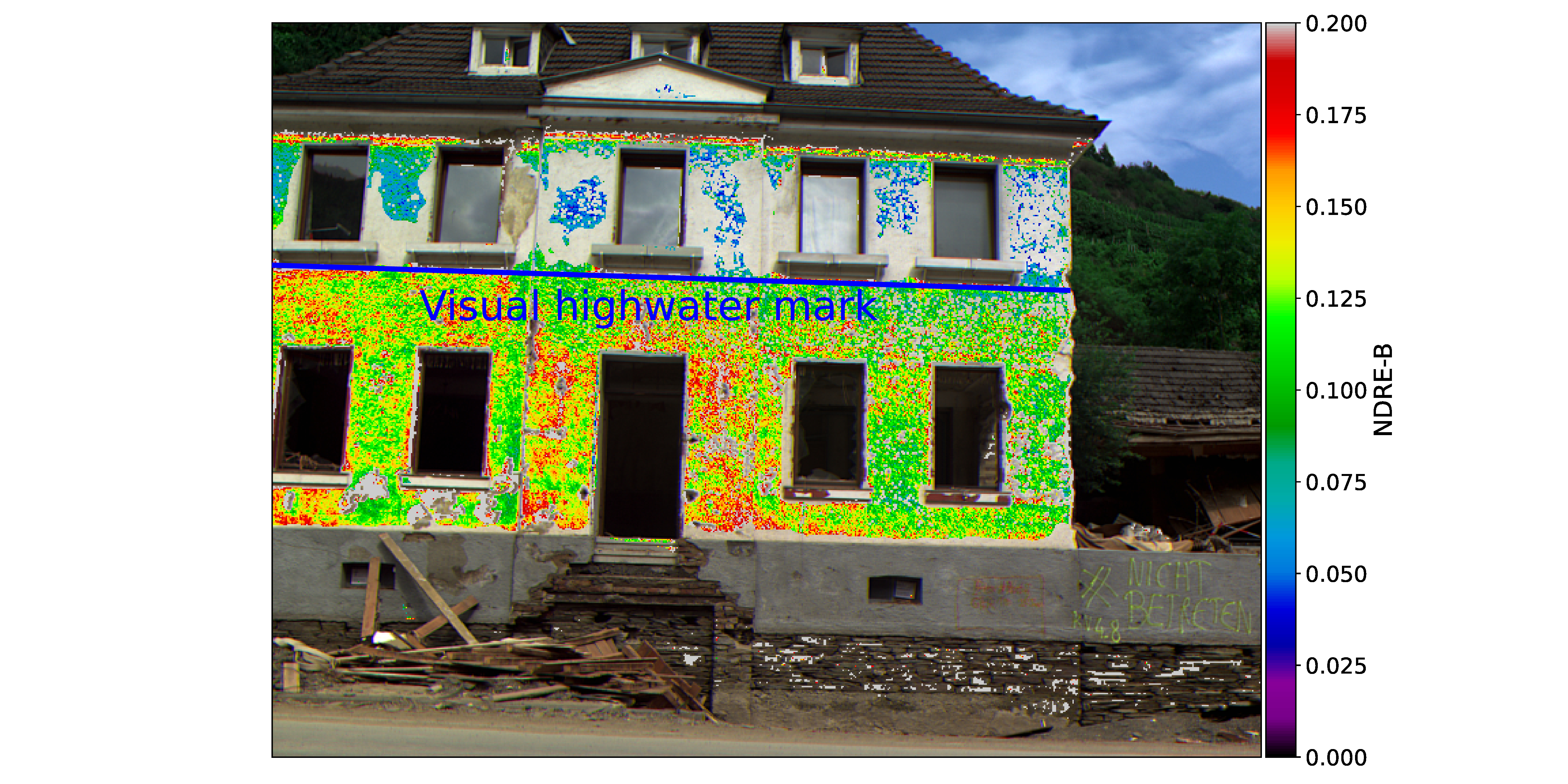 Normalized difference between red-edge and blue bands (NDRE-B). In this case, pixels with NDRE-B ranging from 0.0 to 0.2 fall below the high water mark such that the maximum water elevation during flooding can be automatically extracted from multispectral imagery.

Additionally, we are applying this technology to map sediment erosion and deposition during extreme flooding events. The main focus of this research is to understand how fluid flow, local geology, and infrastructure design interact to make certain flooding events more destructive. Ultimately, this research will help guide infrastructure design to meet the evolving and potentially destructive influence of climate change.

The Influence of Glacial Firn Microstructure on Intrinsic Permeability

Porous media, such as polar firn, are characterized by small, interconnected pores by which air from the overlying atmosphere can diffuse through the firn column. How well we characterize the pore space, and the ability of air to migrate through it, ultimately dictates how well we can reconstruct past climate records. While several approaches use proxies such as firn density to determine the rate at which air can diffuse through the firn column, including firn microstructure in diffusion calculations has recently been considered. Central to this concept is the intrinsic permeability of the firn, which is dictated entirely by the microstructure and the organization of the pore space. Recently, the coupled use of x-ray micro-computed tomography (Micro-CT) and computational fluid dynamics have shown potential as an alternative to direct measurement of intrinsic permeability in the laboratory. Micro-CT measurements enable non-intrusive reconstruction of the three-dimensional pore space that can be used to create computational models that numerically estimate the intrinsic permeability from the Micro-CT scans. Given the complex geometry of the pore space in glacial firn, the Lattice Boltzmann Method (LBM) has gained popularity for performing these simulations.

3D representations of flow through pore space in glacial firn in samples from depths of 7 meters (left), 26 meters (center), and 70 meters (right).

We are applying this approach to assess the influence of glacial firn microstructure on the difference between the age of air trapped in the firn and the surrounding ice. Understanding the role of microstructure on firn permeability is important for interpreting paleoclimate records from glacial ice.

Generating a realistic representation of a fractured rock mass is a first step in many different analyses. Field observations need to be translated into a 3-D model that will serve as the input for these analyses. The block systems can contain hundreds of thousands to millions of blocks of varying sizes and shapes; generating these large models is very computationally expensive and requires significant computing resources. We have taken advantage of advances made in big data analytics and Cloud Computing and developed an open-source program—SparkRocks—that is able to generate real-world scale block systems containing millions of blocks in minutes and achieve orders of magnitude speedup. Importantly, the same application is able to run on many different computing environments—from a laptop, to desktop, to cluster on the Cloud—so computational requirements can be seamlessly scaled up as required. 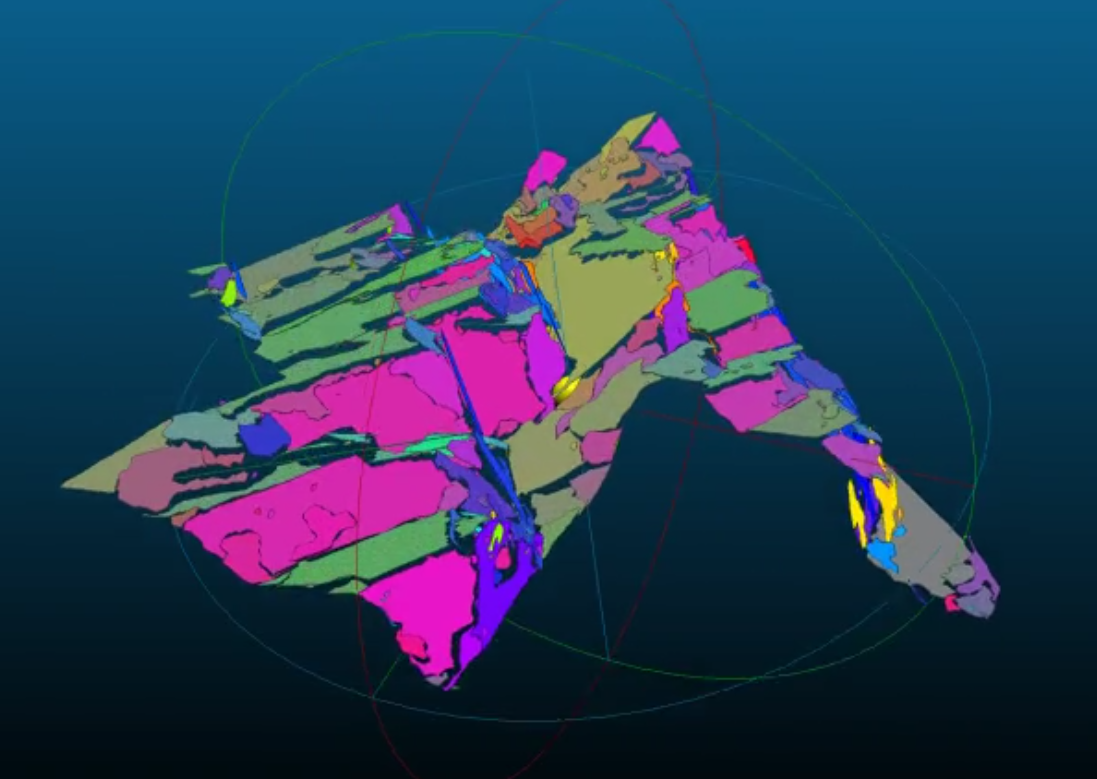 The next phase of this research is focusing on two aspects: 1.) Developing the ability to process various input data types, such as UAV (drone) or LiDAR surveys, to automatically extract rock mass characteristics and their variability and, 2.) generating stochastic realizations of the three dimensional rock mass given the variability extracted from the input data. The functionality of the data stream processing and stochastic generation is being developed to be extensible and agnostic of the application with the long-term goal of developing a research tool that is capable of generating three-dimensional models for various types of problems and that is portable to many different computing platforms.